Careful With The Kingdom

Careful With The Kingdom

But as we have been following our daily reading plan, I have seen another idea in Samuel’s final chapters. That idea is kingdom.

Kingdom, of course, is not an entirely separate idea from covenant king. It is more like a secondary idea. King (covenant or otherwise) inevitably leads to kingdom. The fact that there is a king demands that there be a kingdom.

Yet I hadn’t paid much attention to that kingdom/secondary idea as I read Samuel this time. I’m not sure why. It could be that I was just too focused on the covenant king idea. It also could be that I just missed it (that does happen in Bible reading and study; we sometimes do “just miss” things).

I began wondering why God would give this much space to this story. As I wondered about this, I finally noticed the word kingdom.

Being Careless With The Kingdom

Actually, I noticed the idea of being careless with the kingdom. The Scripture Storyline book again helped me here when author Todd Chipman said this about 2 Samuel 18 & 19: 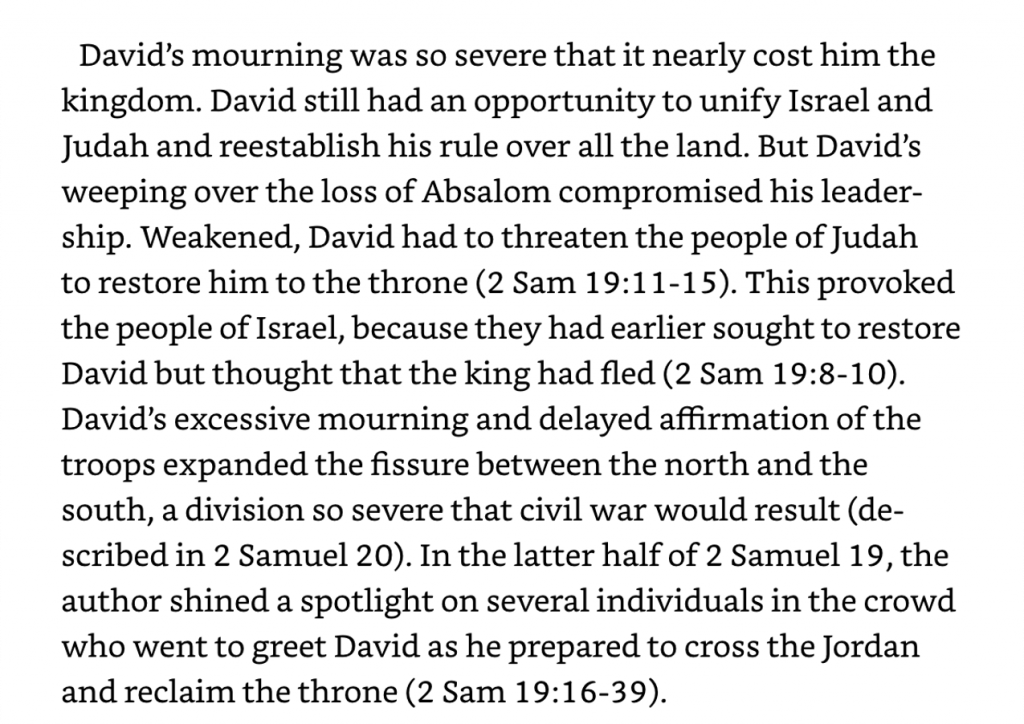 I had always been aware of David’s mourning over Absalom rather than his rejoicing over the victory of his army; I learned this fact decades ago in Bible college. But Chipman here is pointing out that there is something more to this mourning than just the fact that it happened. He is saying this mourning directly contributed to the rebellion of the northern tribes that followed. What he is really saying is that David’s mourning was detrimental to the kingdom and thus his willingness to do it was being careless with the kingdom.

This in turn led me to realize that it wasn’t just David who was careless with the kingdom. Many other characters in this story are careless with it, too. For example:

The One Who Was Careful With The Kingdom

This idea was made even clearer to me through a devotion I happened to listen to on the same day I was thinking about this story. This devotion used John 6:37-39, in which Jesus says this:

Jesus here talks about “those God has given” Him, that is, people. Since the kingdom is made up of people, so those people are effectively the same as kingdom. Jesus is literally and legitimately talking about kingdom here.

Not only so, but Jesus says He was careful with this kingdom. He was so careful with it that He subverted His own will to safeguard it. He chose not to do anything God did not want Him to do so that He would not hurt the kingdom in any way.