Do I HAVE to Read It?

Do I HAVE to Read It? 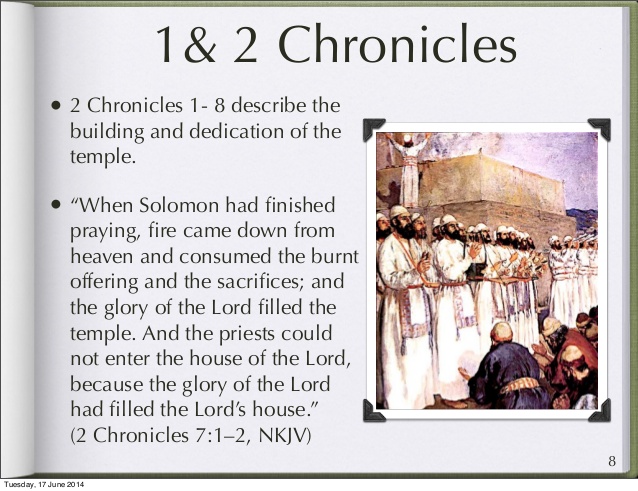 The Challenge of Reading Chronicles

Our reading plan this week brings us into 1 and 2 Chronicles. I have read Chronicles more times than I know. To be honest, I was less-than-thrilled about reading it again for a couple of reasons. The first is that I don’t particularly enjoy the history of the monarchy after the time of David and Solomon. Not everything in the Bible speaks to everyone equally, and this part of Israelite history just doesn’t speak to me as much as other parts do.

The second is that Chronicles is a particularly difficult account of this history. Chronicles records the same material as Kings but it does so in a way that is less accessible for modern readers. The book is full of genealogies, long lists of people whom we not only don’t know but whose names we can’t come even close to pronouncing. They have complicated relationships and places in history we have no chance of keeping straight. I don’t know about you, but it is hard for me to read these genealogies with any type of enthusiasm. It is even harder for me to receive spiritual encouragement and instruction from them.

But less-than-thrilling and difficult as Chronicles may be, it is still Scripture. It is still the inspired word of God that is useful for teaching, rebuking, correcting, and training in righteousness (2 Timothy 3:16). There is still a word from God for us in this book, a word that should not be abandoned just because the book itself is hard for us to read. And we can find and appreciate that word if we keep a few truths about this book in mind.

A Different Point of View

This Exile is one of the big defining tragedies of Israelite history, It is like our Great Depression or 9/11 but much, much worse. It changed how the Israelites saw themselves and how they saw their relationship with God. While Kings records Israelite history from a pre-Exile view, Chronicles records that history from a post-Exile view. The authors of Chronicles saw and survived the Exile. Kings explains why the Exile happened. Chronicles shows how to return to life after the Exile happened. Thus, while both books cover the same material, they cover it from incredibly different perspectives.

History with a Message

The second truth is that Chronicles is not just history but what I call “interpreted history”. It is history that is arranged to convey a certain message. This is seen in the facts that Chronicles does not cover the northern kings at all and does not cover most of David’s errors. While such arranging of history might seem illegitimate to us modern readers, it is actually normal and good.

The Gospels are interpreted histories as well (Matthew interprets Jesus to be the predicted King of the Jews while Luke interprets Jesus as the Savior of the Gentiles). So are most of our histories; when we tell stories to each other, we tailor those stories to make a point. These are not falsifications, nor are they contradictions. They are simply specific applications of history for a specific audience.

In the same way, Chronicles is a specific application of the pre-Exile history of Israel for the sake of the post-Exile audience. The author or authors of Chronicles are not just giving us the history but pulling out pertinent pieces of that history to communicate to the people of their time a much-needed truth.

Give Thanks to the LORD

And the third truth is that truth itself, the truth of Chronicles, the theme or message of the book. That truth is stated for us in 1 Chronicles 16:34, which says, “Give thanks to the LORD, for He is good; His love endures forever.” This statement, first made when David brings the Ark of the Covenant into Jerusalem, is repeated five times in Chronicles.

And that is the truth the authors of Chronicles convey to their post-Exile readers and to us modern people today. They tell us that God still loves us despite our failures, even great moral failures like those that caused the Exile. They show us that God’s love results in our deliverance, just as the people were delivered from the Exile. They help us know that we always have a place in God’s story. That’s why the genealogies are there. The authors tell the people, “You came from this part of the story and so you still belong to the story.”

And that message is a great message. That truth is a great truth. Is it as easy for us to see as it was for the original audience? No. But can it still be seen and is it still true? Yes and yes. There is no doubt that reading Chronicles is a challenge. But there is also no doubt that there is a blessing to be had from meeting that challenge. So I’m going to do that. I’m going to keep reading Chronicles through the first half of June and looking for applications of its truth. And I encourage you to keep doing that with me!