Our Old Testament reading track is taking us into Jeremiah and leaving us there for the rest of the month.

In my opinion, Jeremiah is in a class all its own. Though categorized with Isaiah, Ezekiel, and Daniel as one of the “Major Prophets”, Jeremiah is noticeably different in content and purpose from those books. Isaiah predicted and looked forward to the rise of a Messianic King. Ezekiel struggled to bring rebellious Israelite exiles back to God. Daniel analyzed the world-shaping movements of political powers. But Jeremiah closed the door to a significant part of the history of God’s people and opened the door to another.

The Fall of Jerusalem

Like a lot of the Old Testament, Jeremiah orbits arounds the Babylonian Exile, that is, the Babylonian empire’s conquering of Israel and deportation of its people between 605 and 586 BC. Isaiah predicted this exile, as did Hosea, Amos, and other pre-Exile prophets, but Jeremiah actually experienced it. He was at ground zero for the destruction of Jerusalem, watching from the courtyard of the guard where he was imprisoned as the Babylonian forces broke into Jerusalem and captured Zedekiah, the last Davidic king. He also watched as the Babylonians burned the palace, sacked the Temple, and tore down the city walls.

Jeremiah not only watched these things, but he recorded them as well. He recorded them twice actually, first in chapter 39 and again in chapter 51. It is likely his record of these events was incorporated into Kings as well, as 2 Kings 25 covers those same events and is almost identical to Jeremiah 52.

This is certainly true of Jeremiah. Not only can we sense the grief he felt at the fall of Jerusalem in this book, but we are told about it at length in his other book, Lamentations.

Thus, what we have here is a man who watched something awful happen.

The Queen of Heaven

But we also have a man who understood why that awful thing happened. He expresses this understanding when he talks about a character he calls “the Queen of Heaven”.

The second time is in chapter 44. After the fall of Jerusalem, the Israelites who are left attack Jeremiah, stating that they will continue to worship the Queen of Heaven despite his condemnation of it.

It is very interesting that the Queen of Heaven appears in Jeremiah in these two places. These appearances actually bookend the prophecy: one is in the early, pre-fall of Jerusalem part of the book and the other is in the later, post-fall of Jerusalem part of the book. This cannot be accidental. By referencing the Queen of Heaven in these two places, Jeremiah is cleverly showing just how big a problem she (and other forms of idolatry) was for the Israelites.

He is also challenging us to consider what forms of idolatry might be a problem for us, that is, what “Queens of Heaven” we modern people might be worshipping.

But the bad is balanced with the good here. In addition to revealing the great and continuing problem of idolatry, Jeremiah also reveals the solution. God Himself describes this solution in this book as a “new covenant”: 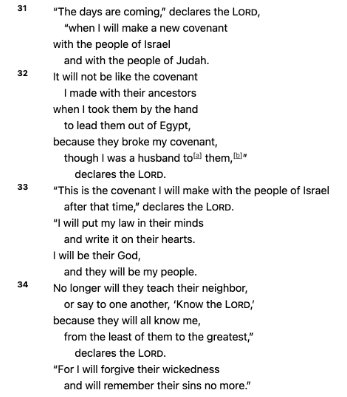 This is an incredibly important passage in Jeremiah. One of my Bible college professors believed it was the “center passage” of the book, that is, the passage which reveals the book’s core theme. That may well be true. Even if it isn’t, though, it is clear this passage is central in some way. It is quoted in its entirety in Hebrews 8, and the phrase “new covenant” is quoted in by Jesus in Luke 22 and by Paul in 1 Corinthians 11 and 2 Corinthians 3.

Now this new covenant is obviously the covenant God has made with all of us through Jesus. And what this new covenant means is that the fall of Jerusalem wasn’t the end for Jeremiah, the Davidic monarchy, or even the Queen of Heaven-worshipping Israelites. Rather, it was just a stepping stone to something better, to an intimate relationship with God that was not possible under the old covenant and that would not be broken by any idol.

Altogether, what we have in Jeremiah is a mixture of grief, guilt, and goodness. There is Jeremiah’s grief not just in the fall of Jerusalem but in the people’s repeated rejection of the word of God and his own personal hardships in trying to overcome that rejection. There is the guilt in the people’s fidelity to the Queen and Heaven and constant refusal to submit to God’s clear instructions. And there is the goodness in the promise of a new covenant, a promise we are experiencing ourselves today.

But the greatest of those three is the goodness. Yes, the grief and the guilt are perhaps more obvious. That is admittedly what I think of first when I hear the name Jeremiah. But the goodness of that new covenant is greater, and that goodness is more than anything what God is giving us in this book.