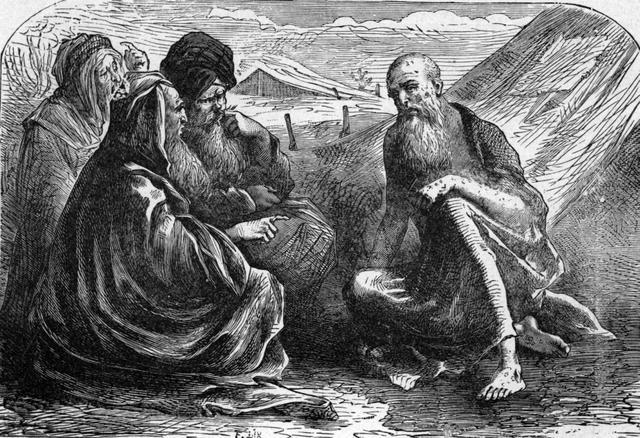 Right And Wrong At The Same Time

We are in now in the middle chapters of the book of Job, and we will be in those chapters for the first part of July. As I told you in the last blog post, these chapters record an argument between Job and his three friends Eliphaz, Bildad, and Zophar. These three friends originally came to comfort Job in his losses, but they get offended after Job curses the day of his birth and so engage him in a pretty tense theological dispute. [The irony of this situation, by the way, is not lost on Job; in 16:2, he calls these friends “miserable comforters”, a facetious little dig I find tremendously funny.]

As I also told you in the last blog post, this theological dispute is presented to us as a series of speeches between the friends and Job. Each friend gives Job a speech, to which Job replies with his own speech. This pattern occurs three times (though the third time is incomplete; Zophar does not make a third speech for some reason). So we have a lot of speeches here.

And the thing about the friends’ speeches is that they are wrong. God says they are wrong in the final chapter of the book. There He tells Eliphaz that he and the other two friends had not “spoke the truth about” Him as Job had (Job 42:7). For this reason, I thought these speeches were wholly in error. I thought every statement made in this speeches was inaccurate or untrue and therefore could be completely ignored.

Is It ALL Wrong?

That was a problem for me. I immediately wondered how Paul could quote something as being right when God had clearly said it was wrong. I wondered that and I thought about that for a while. A long while.

And then I saw the solution to this problem (I saw it with the help of the Spirit, no doubt; I’m not smart enough to come up with these things on my own). I saw that it wasn’t what Eliphaz, Bildad, and Zophar said that was wrong. Rather, it was the way they understood and applied what they said that was wrong.

You see, what the friends say in all their speeches is that human suffering is a punishment for wickedness. That really is their one and only message. And that message is right. The Bible repeatedly tells us that God punishes sin and that human suffering thus could be a punishment for sin. So the message the friends are asserting in this speeches is not wrong (which is why Paul can quote it in 1 Corinthians).

What is wrong is the way the three friends understood the idea and then applied it to Job. While they were right in understanding that human suffering is a punishment for sin, they were wrong in understanding that human suffering is always and only a punishment for sin. That being the case, when they saw Job’s suffering they concluded he must have been being punished for that sin (though they didn’t know and couldn’t see what that sin was). They concluded that and they told him that. In eight long, harsh speeches.

We Can Be Right AND Wrong

In short, these guys were right but they were wrong at the same time. What they said and believed was true, but their limited understand and application was not true. And sometimes I’m right-yet-wrong in that same way. That’s the real value of the insight the Holy Spirit gave me here. There is no value in pointing at these friends and saying, “Look how wrong they were.” There is only value in looking at myself and saying, “Been there, done that.” And I have. I have often wrongly applied right truths.

For example, the church I was raised in and the Bible college I attended were very concerned about “false teachers” and “liberals” (theological liberals, that is; those who deny the inspiration of the Scriptures). I was taught to “mark and avoid” (Romans 16:17) such people, and I did. But as I look back, I see that many of the people I marked and avoided were not false teachers or theological liberals at all. I was right but wrong.