Luke – The Path of Peace

Luke – The Path of Peace

If you are following the New Testament track of this year’s reading plan, you are halfway through the Gospel of Luke.

Luke is “the Gentile’s Gospel”, the Gospel aimed at a Gentile audience. Luke is also the “carefully investigated” Gospel (Luke 1:3). Luke was not an eyewitness to Jesus, but he collected information from those who were eyewitnesses to Jesus. And Luke is also one of the three “synoptic” Gospels (Matthew, Mark, and Luke). He records pretty much the same general story and specific events Matthew and Mark record in their Gospels.

But Luke also records some information of his own. Luke relates some events Matthew and Mark do not. Among those are the story of Zechariah and Elizabeth, the parents of John the Baptist, Jesus’ forerunner. He tells us how an angel appeared to Zechariah (1:5-25), how Elizabeth met Mary when both were pregnant (1:39-45), and how Elizabeth and Zechariah named John (1:57-66). He also tells us about the song Zechariah sang after the naming of John (1:67-79).

Tradition calls this song “Benedictus” or “Blessing”. In it, Zechariah first describes what God is doing through the soon-to-be-born Messiah (1:67-75). He then describes what his son John will do (1:76). Then then turns back to Jesus and makes a few more comments about what he will do (1:77-79).

There are many wonderful truths in all three sections of this song. Zechariah makes many statements here which drive my understanding of God and Jesus and the Gospel and what they are doing in me. One of the greatest of these is the final one he makes. As Zechariah ends his song, he says Jesus will “guide our feet into the path of peace”.

Now this might sound different to you. It might even sound “wrong”. If your faith walk has been anything like mine, you were taught at a young age that Jesus “came to die for our sins”, that is, that Jesus’ mission was to offer Himself on the cross as a sacrifice. I was taught this so emphatically that when I first heard the song “Lord, I Lift Your Name On High” as a teenager in the early ‘90s, I was offended by it. The chorus of that song says to Jesus, “You came from heaven to earth to show the way”. I remember hearing that and saying to myself, “Jesus didn’t come to show the way. Jesus came to go to the cross.”

But my teenage indignation was entirely unfounded. Yes, it is true that Jesus came to sacrifice Himself on the cross for us. This is indeed one of His reasons for coming, and you will never find a stronger proponent of it than me. The technical term for this is propitiation or substitutionary atonement (Romans 3:25 and many others), and I don’t know that there is anyone out there who believes in it as strongly as I do.

What I have come to learn, though, is that this is not the only reason Jesus came. Propitiation is not the only thing Jesus accomplished in His earthly ministry. “Showing the way” was indeed another. Demonstrating the right way to live and teaching us how to live it was another legitimate mission Jesus had.

(Quick note: revealing God’s nature to us is a third reason Jesus came, and it is as important as the other two. I don’t mean to break the flow of our post here, but the teacher in me can’t let that slide by without mention.)

And that is what Zechariah is pinpointing in this final line of his song. He refers to this “way” as “the path of peace”. That is not the only name for it, but it is an especially great one. Its greatness is seen clearly when we consider its opposite.

The opposite of “the path of peace” is the path of what the Bible alternatively calls “cruelty” or “violence”. Zechariah was clearly thinking about this path in this song. We know this first because he was living under a system of cruelty as Israel was being controlled by the authoritative Romans during his time and second because he mentions it when he refers to his “enemies” and “the hands of those who hate us” (1:71).

We see this path in other places as well. If you’re doing the Old Testament track of our reading plan as well as the New Testament truck, you’ve already seen this path of cruelty several times in Genesis. The best example is Lamech, a descendant of Cain. He “codifies” cruelty. He declares that the path of cruelty will be the path he walks for the rest of his life.

We see in in other places as well. We see it clearly identified as “the path of cruelty” or “the path of violence” or some synonymous term. Consider these verses: 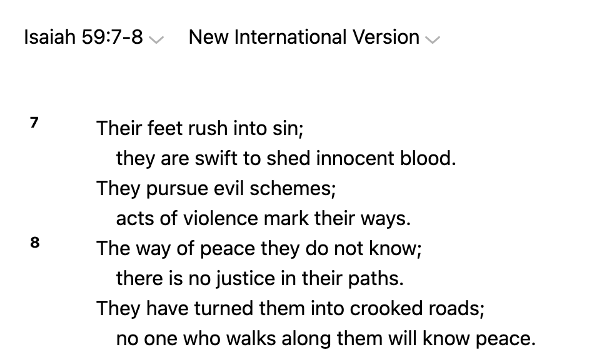 And this is just a small sample. I encourage you to do a Bible search on “cruelty” and “violence” and consider the many verses that pop up. You will be surprised, I think, at just how prevalent this idea is. This path is a real thing. It is a real ugly thing that has afflicted us terribly and by which we have at times afflicted others terribly.

Jesus and the Path of Peace

What Jesus has done is reveal a new way. He has blazed a different path, the path Zechariah called “the path of peace”.

You can see this in multiple places in Jesus life. In fact, you’ve probably already seen in the other chapters of Luke you have read by this point. But perhaps the best place to see it is in His death. Yes, the cross was a literal, historical event. Yes, the cross effected the propitiation of sin. But the cross is also an example and illustration. It demonstrates the path of peace. It demonstrates it in the most crucial place of all time, the very place where the fate of the world was decided. In that place, Jesus did not fight. He did not fight as the world fights, that is (see 2 Corinthians 10:3-4). Rather, Jesus surrendered. He submitted. And He even asked His tormentors be forgiven (Luke 23:34).

Peter describes how Jesus walked the path of peace during His crucifixion in this way:

This is what Jesus has done for us. This is yet another way Jesus “saves” us. He shows us the path of peace and enables us to walk it.

And, as Zechariah knew, that is something to sing about.