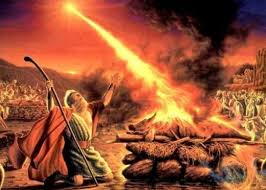 1 Kings 22 is part of our reading today. In this chapter, King Ahab, the wicked king of Israel, tries to convince King Jehoshaphat, the good king of Judah, to join him in an attack on Ramoth Gilead. For some reason, good King Jehoshaphat allowed himself to be convinced to do just that.

But he did put up a little resistance. Before being completely convinced, he wanted to “First seek the counsel of the Lord.”, that is, to ask God whether or not he should do what Ahab was suggesting. At that, Ahab tried to win Jehoshaphat to his side by presenting him with four hundred “prophets”. These prophets were not legitimate prophets of God but instead false prophets, telling the king what he wanted to hear in exchange for payment.

A Prophet of the Lord

Fortunately, Jehoshaphat recognized that these prophets were false and asked “Is there no longer a prophet of the Lord here whom we can inquire of?”, that is, “Isn’t there are real prophet around here whom we can trust to tell us the truth?” As it turns out, there was such a prophet, Micaiah son of Imlah.

A matter of good and bad…

Now the I hate him part of that statement is likely to catch our attention since we know that hatred of any kind, much less of an innocent prophet of God, is wrong. But what catches my attention even more is the way Ahab describes and apparently sees this situation. He sees it as a matter of good and bad. He considers what he wants to be good, and he considers what he does not want to be bad. When the real prophet tells him what he does not want, then, that is bad to him.

Or life and death?

And that is a terrible way of seeing this situation or any situation. It is terrible because directions from God such as the prophet Micaiah was giving Ahab are not a matter of good or bad nor a matter of what we want or what we don’t want. Rather, they are and can only be a matter of truth. They are most often a matter of life and death truth.

That was certainly the case here; the truth Micaiah gave Ahab would have saved his life if he had accepted and followed it, while the lies the false prophets ultimately cost him his life. And that is the case with everything God says to us today. God has given us lots of directions in His word.

He has given us directions about what to love, telling us not to love this world or the things of this world (1 John 2:15).

He has given us directions about sexual behavior, telling us to be pure (1 Thessalonians 4:3).

He has given us directions about our speech, telling us not to be vulgar (Ephesians 5:4).

The truth is still the truth…