The Book of Proverbs

We were in Psalms for four weeks and a few days, and now we are moving into Proverbs.  In some ways, Psalms and Proverbs are very similar. They are both collections rather than narratives, both poetry, both wisdom literature, and both associated with a renowned king of Israel (Psalms with King David and Proverbs with his son King Solomon).

The opening section of Proverbs is quite long.  It runs from chapter 1 to chapter 9 (technically 1:8-9; 1:1-7 is an introduction to the book) and will take us three days to cover by our reading plan.  When I was in Bible college, I noticed this section of Proverbs one night, as well as all the other sections.  I jotted down a quick outline of these sections in the margin of my Bible.  Here is a picture of that outline: 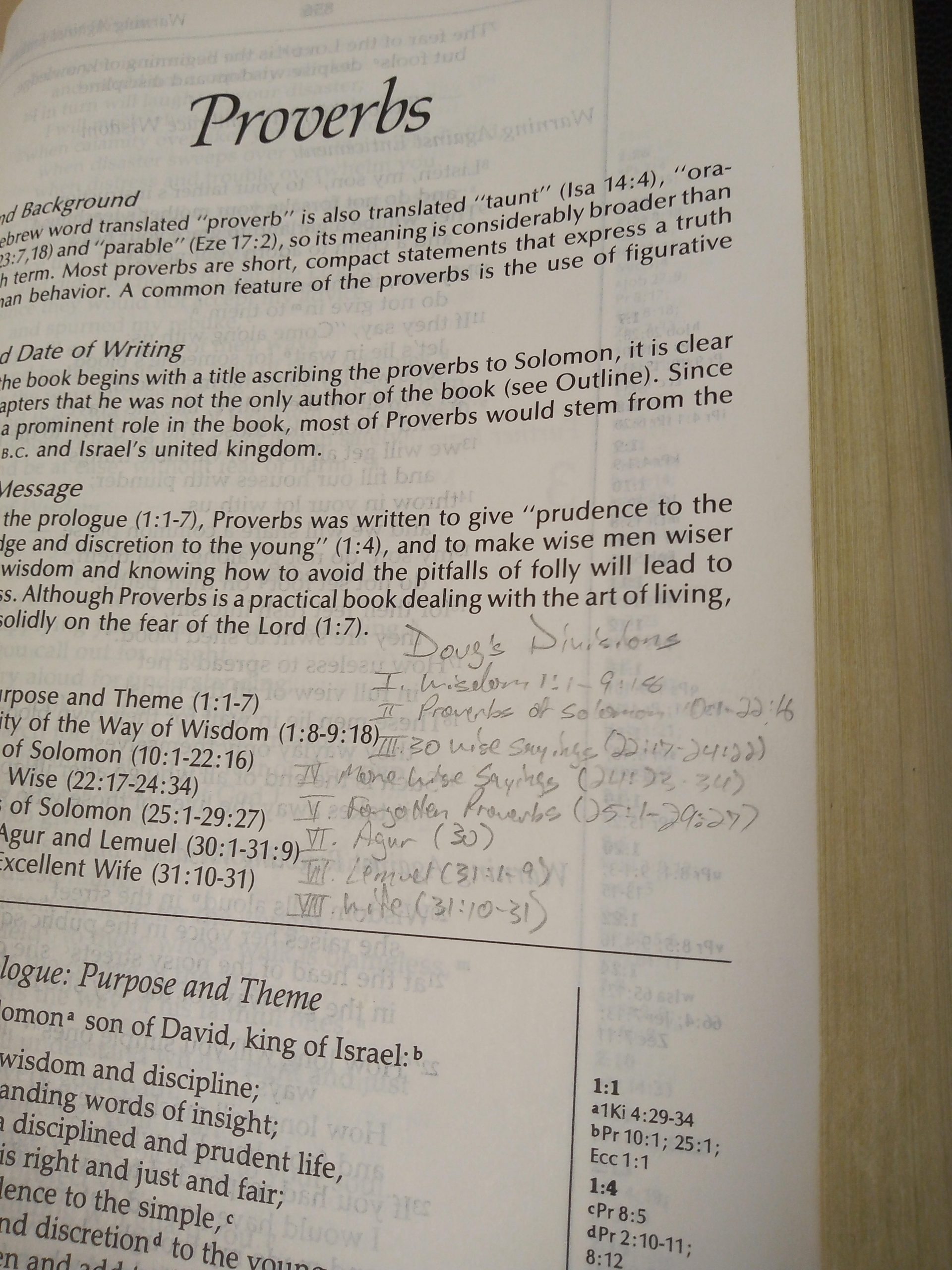 What I want you to notice in this outline is that I called that first section “Wisdom”.  I did so because I thought that is what the section was and what the section was all about.  I thought it was what theologians would call “a general treatise on wisdom” (yeah, that’s the kind of language theologians use and Bible college students try to imitate).

But what I have discovered in the years since is that this section is not a “general treatise” on wisdom, nor should it be regarded as such.  No, the section should be regarded as the very thing it presents itself as: a talk between a parent and a child.

And this portrayal is maintained throughout the section.  Solomon refers to his hearers as “son” or “sons” seventeen more times in these chapters. A quick note here. The term son is less gender-specific in the Bible than it is in our times. It is closer to heir than it is to boy, referring more to family resources and responsibilities than the gender of the individual. That being the case, it applies to women as much as it applies to men.  He refers to himself as “father” two more times (though every time he refers to the hearer as a son he is implying that he is a father, so it is really more than two).  And he also refers to this same instruction as coming from a “mother” three times (bringing both parents into the equation).

The image we are really given here, then, is not this cold image of a sage or teacher or pedagogue passionlessly delivering information. That’s the image of Proverbs I had as a child and even as a Bible college student.  No, it is the far warmer image of a parent sitting on the edge of their child’s bed, taking their child’s hand in their hands, looking into their child’s eyes, and lovingly, desperately reasoning with them.