The Most Unique Psalm Ever

The Most Unique Psalm Ever

A Most Unique Psalm

All the psalms are unique, but none is as unique as Psalm 119, the psalm we are reading today and tomorrow.

This psalm is unique on at least three accounts. The first is that it uses a Hebrew literary device we call an “acrostic”. Every section is linked to the Hebrew alphabet. The first section starts with the first letter of the alphabet, the second with the second letter, and so on. In some translations, such as the NIV, these sections are even marked with their Hebrew letter so we can see them.

The second way this psalm is unique is in its repeated references to God’s word. The psalmist uses eight different words to describe God’s word (law, word, judgments, testimonies, etc.), and he uses at least one of them in every verse except two (verses 122 and 132).

And the third way this psalm is unique is its length. You may have heard that Psalm 119 is the “longest chapter” in the Bible. This is not entirely true because it is not a chapter; the psalms are each individual works, not chapters of a longer work. But it is true that it is long. It is so long that our reading plan had to cut it in half. It is so long that its verse numbers get into the high 100’s.

And it is so long that I have difficulty appreciating it. If you know me, you know I appreciate the shorter parts of the Bible more than the longer parts. This is because I can see what I call “the big picture” (that is, the overarching message) of these shorter parts far easier than I can see the big picture of longer parts. For example, I understand Joel or Habakkuk or Nahum far more than I understand Isaiah. I just see their big picture easier.

Something happened recently, though, which helped me appreciate Psalm 119 better than I have before. This something is that I learned the background of this psalm. I can’t remember now how this happened. All I remember is that I somehow came across some book or article which talked about where this psalm came from. What this book/article/whatever said is that Psalm 119 came from the Babylonian Captivity. It said Psalm 119 was written by an Israelite who had been taken captive by the Babylonians.

Who Wrote the Psalms?

Now you may have heard that the psalms were written by David. That is partly true; many of them were written by David. But not all of them. Solomon wrote at least two. Moses wrote one. Asaph wrote twelve, the Sons of Korah wrote eleven, and Ethan and Heman both wrote one. So there other psalmists besides David. And that was apparently the case with Psalm 119. It was written by someone else. We do not know exactly who this someone else was; we don’t know his name. But based on the number of times he mentions enemies in this psalm, it is likely he was under a great deal of stress.

For this reason, scholars have come to believe that this person was a victim of the Babylonian Invasion which we read about in Kings, Chronicles, Jeremiah, and other prophets. As we see in those books, the Babylonians came into Israel at the end of the 600s and beginning of the 500s BC, destroyed the city, and carried off the majority of the population.

The person who wrote this psalm was apparently one of those carried off, and what he seems to be doing in this psalm is trying to figure out how to walk with God now that the priesthood and the Temple are no more. What he settles on is God’s word. That’s why there are so many references to God’s word in the psalm. God’s word is the one thing this person believes can keep him close to God as he lives in enemy territory without all the other spiritual blessings he used to enjoy.

But that background isn’t the only thing which helped me appreciate this psalm. There was another. After I learned about the background of this psalm, I started thinking about its long structure. What I finally realized is that I was reading it wrongly. I had always tried to just blast through the entire thing, reading it all in one shot. I did so because I believed it was one work. One work should be read in one shot, right? But when I realized that this psalm was a tool this Israelite captive created to keep himself close to God, I further realized it was not intended to be read in one shot. It was intended to be read much slower than that. It was intended to be read and appreciated section by section.

I saw, in fact, that there is an individual structure to these sections. Each section has eight verses, and those eight verses function like a logical argument known as a syllogism. Syllogisms have three parts: 1) a thesis (an idea), 2) an antithesis (another idea that enhances or contradicts the first idea), and 3) a synthesis (a conclusion that reconciles the first idea and second idea). It looks something like this: 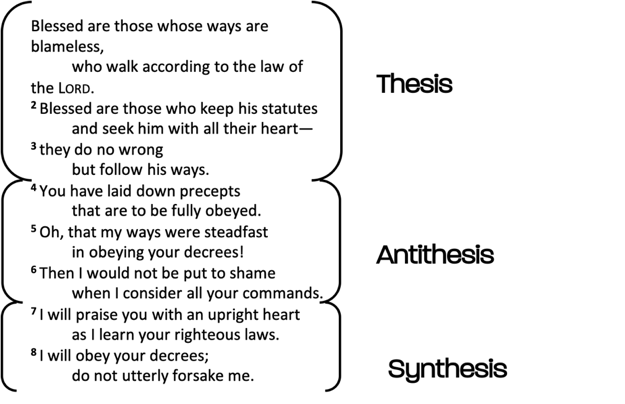 When we understand that this is how the sections are structured, we understand what we are to do with them. We understand that each section is its own idea that is to be considered independently and slowly. That doesn’t mean that there isn’t a big picture to this psalm. There clearly is. The “enemies” which seem to be driving the psalm are only mentioned in the middle sections, which makes me think the first few sections are an introduction, the middle/enemies sections are the body, and the final few are a conclusion.

But it still remains that each section is a logical idea all of its own that is meant to be given a lot of individual thought. In fact, it is probable that the author really intended readers to only look at a section a day, taking that section’s lesson as a devotion for that day and then moving on to the next section the next day.

So that’s what this unique psalm is and that’s the way it is meant to be used. This is a devotional tool which an Israelite exile constructed under great stress to keep himself closer to God. If we use it the way he did, it will keep us closer to God, too.