The Revelation – An Anthology About Everything

The Revelation – An Anthology About Everything

The New Testament track of our daily Bible reading plan is taking us into Revelation or, even better, The Revelation.  We will end June with this book. We will spend most of July with it as well.

In my experience, no book of the Bible gets as strong a reaction as The Revelation. Many people are attracted to it because they believe it shows a blueprint or even a timeline of the Second Coming. Believing this, they pore over the book looking for clues, hints, and signs of Jesus’ return.

But other people are afraid of The Revelation. They believe it is predicting painful punishments and persecutions that may or may not happen to them or their loved ones. Not wanting to look at or think about such things, they run away from the book.

In truth, The Revelation should get a strong reaction from all people, but that reaction shouldn’t be either of these two reactions. Rather, the reaction Jesus trying to elicit from us with this book is one of encouragement and contentment.

The Revelation of Jesus

Yes, I said Jesus. That is because Jesus is the true author of this book. The verse first two verses tell us this:

The revelation from Jesus Christ, which God gave him to show his servants what must soon take place. He made it known by sending his angel to his servant John, 2 who testifies to everything he saw—that is, the word of God and the testimony of Jesus Christ.

Notice that in these opening verse, the book is identified first as The Revelation (which, as I said above, is the better title for it) and second as being from Jesus Christ (that is, originating with Him and coming from Him). We are further told Jesus made this book known by sending his angel to his servant John. This is telling us that while John “wrote down” the book, he did not actually “author” it. He was simply passing it along as it was passed along from Jesus via angel to him. In fact, there are statements in the book which seem to suggest John was rather passive in the creation of this book. Many times we see John being told to write and what to write. This happens in 1:19, 10:4, 14:13, 19:9, & 21:5)

And what Jesus says or “reveals” (the true meaning of apocalypse) to us here is meant to be encouraging. That is, it is meant to encourage us as we live the life of faith.

The life of faith is an often difficult one. My devotions reminded me of this today by showing me this verse:

19 The righteous person may have many troubles,

but the Lord delivers him from them all;

John and the early Christians are perfect examples of this truth. They had “many troubles”. John was exiled on an island and probably made to work in the salt mines because of his faith. The early Christians were being attacked by both the government (2:10, 2:13) and false religions (2:3, 2:9).

What Jesus is doing here is encouraging these people that they would not be experiencing these attacks forever. For all its difficult and sometimes intimidating language and imagery, all The Revelation is saying is what Psalm 34:19 says: God delivers us from all troubles.

Jesus does this by giving us seven “short stories”. In the body of The Revelation, He tells us one story after the other. The first six stories are all the same (even though the first one is in a very different style from the other five) and cover the same time period, which is the entirety of human history. This really is an anthology rather than a chronology, and it really does cover or at least give a high-level overview of everything. The seventh story picks up where these first six stories end and shows us what happens next, which is existence in “the new heaven and the new earth”. Here is an outline depicting these seven stories: 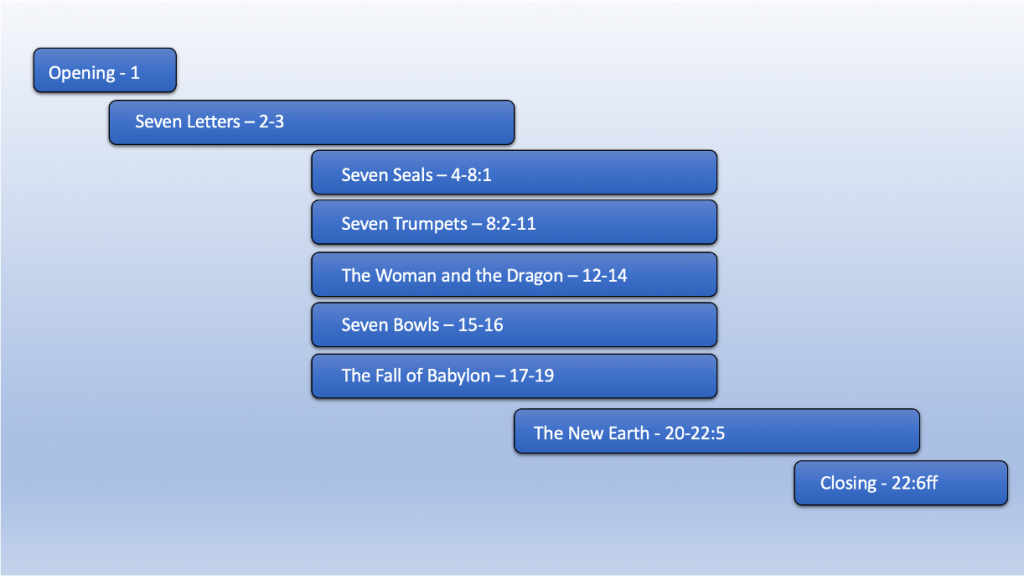 Now each story has its own emphasis. While they cover the same basic points, they do stress those points differently. But each is still contributing in its own way to this general truth: the faithful are being attacked by governments and false religions that have been stirred up by the Evil One, but God is working behind the scenes to bring people back to Him and will ultimately stop the Evil One and everything he does for good.

This general truth makes The Revelation the perfect ending to both the New Testament and the Bible as a whole. This would be true even if the book did not end with the grand conclusion we find in chapter 22. But we do have that chapter and that conclusion, and that makes the ending even better.

This chapter shows us the ending of the final story. In this ending, we see the “tree of life” from Genesis 2 and 3. While access to that tree had been removed after Adam and Eve fell, it is now returned to all people. This has led some to describe Revelation 22 or even The Revelation as a whole as “Paradise Restored”. It is definitely a call back to the first chapters of the Bible and brings the entire Bible together into one cohesive and ultimately triumphant narrative.

If this were a movie, the music would be swelling at this point and all the good emotions would be coming as the narrative is brought to a “happy ending” and the heroes ride off into the sunset. That is literally what is happening in this chapter. Jesus is riding off into the sunset to establish a happy ending, and He is taking all of us with Him.

Not Easy, But Good

I don’t blame people for reacting to The Revelation in the wrong ways I mentioned earlier. I understand those reactions. The book does as well, admitting at least twice that “wisdom” is required to correctly interpret what is being said (13:8 and 17:9).

But the book also encourages us to develop that wisdom. It encourages us to push through the difficulty and understand the good message of God rescuing us from our troubles that is being communicated here. If we do that, we will be rewarded with an understanding of “everything”, that is, every overriding reason things are happening in this world as they are happening. That understanding will in turn give us encouragement and contentment in our own “many troubles”, which is exactly what Jesus set out to do in this book.